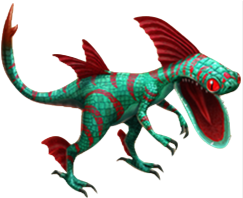 The Lead Stinger guides its pack into battle using basic group tactics, and is easily distinguished from other Speed Stingers by its unique spine sail and coloring.

Alpha Speed Stinger was available as part of a special event for a limited time from February 22, 2017 until February 27, 2017.

During this event Alpha Speed Stinger could be purchased from the Book of Dragons for 7,500

A Alpha Speed Stinger Egg could be found when searching the following Special Event Location:

Note: With the update of v1.45.17:
The amounts shown in Levels 1 thru 118 ("Upgrade to Next Level" column) have increased and it will now cost more to upgrade this Dragon.
Gathering Stats for this Dragon remain the same.

If the Titan Training fails, the player will be compensated with 5.52M

Retrieved from "https://riseofberk.fandom.com/wiki/Alpha_Speed_Stinger?oldid=123370"
Community content is available under CC-BY-SA unless otherwise noted.