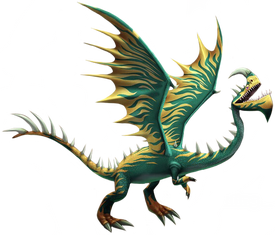 It was discovered one summer that if a Windstriker blows hot air into the ocean it becomes pleasantly warm. Boiling Billows instantly became Berk's official sea-heater.

The Windstriker uses super-heated blasts of air to turn up the heat on its opponents.

The Boiling Billows is a Exclusive Windstriker dragon of the Sharp Class.

A Boiling Billows Egg could be found when searching the following Special Event Location:

Note: With the update of v1.45.17:
The amounts shown in Levels 1 thru 113 ("Upgrade to Next Level" column) have increased and it will now cost more to upgrade this Dragon.
Gathering Stats for this Dragon remain the same.

If the Titan Training fails, the player will be compensated with 5.0M

Retrieved from "https://riseofberk.fandom.com/wiki/Boiling_Billows?oldid=127647"
Community content is available under CC-BY-SA unless otherwise noted.