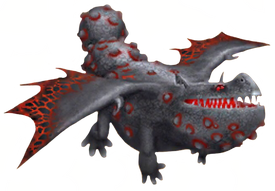 A face only a... Gobber could love? This Hotburple scares the willies out of most, but Gobber took a quick liking to it, affectionately calling it his “little coal-calf”.

The slow Hotburple is anything but lazy when it comes to battle. Opponents will have trouble getting out of its way!

The Chartooth is a Exclusive Hotburple dragon of the Boulder Class.

The Chartooth can be purchased from the shop for 12,000

A Chartooth Egg can be found when searching the following locations:

If a Chartooth Egg is in an extra saddlebag that the player chose not to purchase when searching with Toothless, the egg can be purchased for 7,000

Search only; cannot purchase directly for

A Chartooth Egg could be found when searching the following Special Event Location:

Retrieved from "https://riseofberk.fandom.com/wiki/Chartooth?oldid=121307"
Community content is available under CC-BY-SA unless otherwise noted.