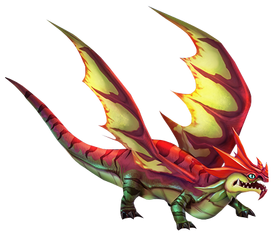 Egg Biters usually keep to the shadows, but not Chompers! It loves being center stage and It will bite anything that tries to steal its spotlight.

These Dragons have a natural instinct to fight. They are biters right out of the egg!
The Chompers is a Exclusive Egg Biter dragon of the Sharp Class.

Chompers can only be acquired from Special Events or Odin's Market.

During this event Chompers could be purchased from the Book of Dragons for 12,000

A Chompers Egg could be found when searching the following Special Event Location: