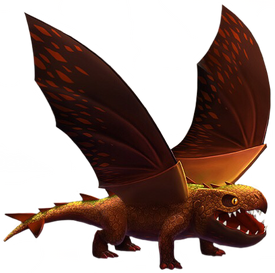 She might look a sunrise, but Dawnstar is really grumpy in the mornings. She sleeps in late, and doesn't appreciate being woken before noon.

Its booming roar not only disorients victims, but also serves as a call to its kin. Small Shadows flock under its great wings, firing explosive lava in unison.

The Dawnstar is a Exclusive Alpha Shadow dragon of the Stoker Class.

Dawnstar can only be acquired from
Special Events.

The Dawnstar was available as part of a special event for a limited time from September 09, 2019 until September 13, 2019.

During this event Dawnstar could be purchased through Collections for 12,000

Retrieved from "https://riseofberk.fandom.com/wiki/Dawnstar?oldid=118711"
Community content is available under CC-BY-SA unless otherwise noted.