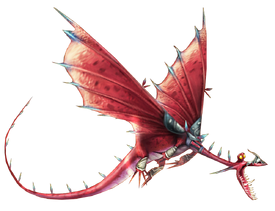 Rescued from one of Drago's Traps: A Changewing!

The Changewing distracts opponents at a distance while lobbing balls of acid in their general direction.

The Defender Changewing is a Changewing Battle dragon of the Mystery Class.

The Battle Changewing is only available from Collections.

The Defender Changewing was available as part of a special event for a limited time from January 2, 2015 until January 5, 2015.

During this event Defender Changewing could be purchased through Collections for ?

Some collection items could be found when searching the following Special Event Location:

If Titan Training fails the player may be compensated with either ? Runes or ? Fish.

Retrieved from "https://riseofberk.fandom.com/wiki/Defender_Changewing?oldid=21022"
Community content is available under CC-BY-SA unless otherwise noted.