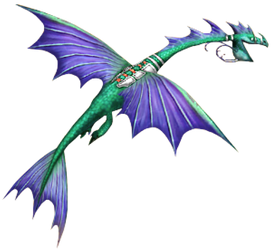 Rescued from one of Drago's traps: A Sliquifier!

The swift-moving Sliquifier uses its speed to churn up a powerful acid stream to fire at its opponents.

The Defender Sliquifier can only be acquired from
Defender Dragon Collections
or
Special Event Collections.

The Defender Sliquifier was available as part of a special event for a limited time from April 10, 2016 until April 11, 2016.

During this event Defender Sliquifier could be purchased through Collections for 5,500

If the Titan Training fails, the player will be compensated with either 33

If the Valka Titan Training fails, the player will be compensated with either 51

Retrieved from "https://riseofberk.fandom.com/wiki/Defender_Sliquifier?oldid=122260"
Community content is available under CC-BY-SA unless otherwise noted.