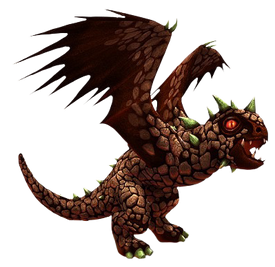 Don't let his spooky appearance fool you – Dreadel is all about fun and games. During snowball fights, he acts as a moving shield for the smaller Viking children.

These vast, stony Dragons show little room for weakness, but a clever mind can exploit their blindness. Be wary, however; they have a keen sense of smell.

The Dreadel is a Exclusive Sentinel dragon of the Boulder Class.

Dreadel can only be acquired from
Special Events.

A Dreadel Egg could be found when searching the following Special Event Location:

If the Snoggletog Feast was completed before December 09, a glitch in the reward animation could crash the game, but the real surprise was that when/if you did get the reward you could find a MAX level (150) Sparkheart in your Hangar!

As compensation for cancelling/modifying the two events, Ludia gave a Level 1 Sparkheart, and a level 1 Dreadel to all players, through the mail system. (the offer expired within 48 hours)

Retrieved from "https://riseofberk.fandom.com/wiki/Dreadel?oldid=124106"
Community content is available under CC-BY-SA unless otherwise noted.