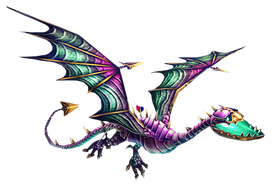 Sword Stealers are impossible to keep out of battle...it's the best way to get close to spare swords and shields and build up their armor!

The Exotic Sword Stealer can only be acquired from
Exotic Dragon Collections
or
Special Events.

During this event Exotic Sword Stealer could be purchased from the Book of Dragons for 12,000

A Exotic Sword Stealer Egg could be found when searching the following Special Event Location:

Retrieved from "https://riseofberk.fandom.com/wiki/Exotic_Sword_Stealer?oldid=123646"
Community content is available under CC-BY-SA unless otherwise noted.