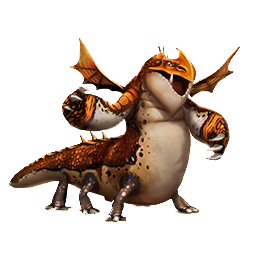 If you hear the pitter-patter of dragon feet in battle, you'd better run: the Thunderpede is on its way!

The Exotic Thunderpede can only be acquired from
Exotic Dragon Collections.

Note: With the update of v1.45.17:
The amounts shown in Levels 1 thru 133 ("Upgrade to Next Level" column) have decreased and it will now cost less to upgrade this Dragon.
Gathering Stats for this Dragon remain the same.

If the Titan Training fails, the player will be compensated with either 108

If the Valka Titan Training fails, the player will be compensated with either 166

Retrieved from "https://riseofberk.fandom.com/wiki/Exotic_Thunderpede?oldid=123398"
Community content is available under CC-BY-SA unless otherwise noted.