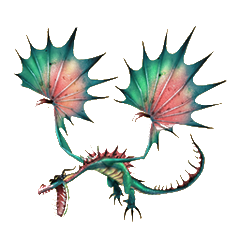 The Riders found Fangmaster for Snotlout, to help get his mind off the absent Hookfang. It turns out that Snotlout would rather go dragonless than ride another Monstrous Nightmare.

The Monstrous Nightmare attacks its foes with powerful streams of fire.

The Fangmaster is a Exclusive Monstrous Nightmare dragon of the Stoker Class.

During this event The Fangmaster could be purchased from the Book of Dragons for 3,750

A Fangmaster Egg could be found when searching the following Special Event Location:

If the Titan Training fails, the player will be compensated with either 120

Retrieved from "https://riseofberk.fandom.com/wiki/Fangmaster?oldid=130613"
Community content is available under CC-BY-SA unless otherwise noted.