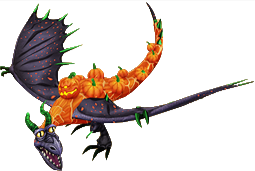 While most Armorwings cover themselves in metal, during Dreadfall Gresskarmor steals pumpkin decorations to use as its armor.

Vikings will have to be very precise, and very careful, to find the chink in this Dragon's armor!

The Gresskarmor is a Premium Armorwing dragon of the Mystery Class.

Available in the Card Packs.

Gresskarmor was available as part of a special event for a limited time from October 28, 2016 until November 01, 2016.

During this event Gresskarmor could be purchased from the Book of Dragons for 3,500

A Gresskarmor Egg could be found when searching the following Special Event Location:

If the Titan Training fails, the player will be compensated with either 62

If the Valka Titan Training fails, the player will be compensated with either ???

Retrieved from "https://riseofberk.fandom.com/wiki/Gresskarmor?oldid=118896"
Community content is available under CC-BY-SA unless otherwise noted.