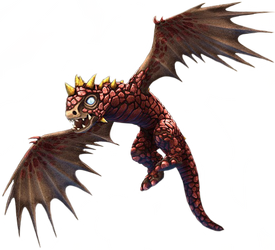 Having never defended Vanahelm with other Sentinels, Cinder is naturally docile. It now "guards" the Shellfire, despite it hardly needing protection.

These vast, stony Dragons show little room for weakness, but a clever mind can exploit their blindness. Be wary, however; they have a keen sense of smell.

The Grim Cinder is a Grim Sentinel dragon of the Boulder Class.

Grim Cinder can only be acquired from
Shellfire Collections

Retrieved from "https://riseofberk.fandom.com/wiki/Grim_Cinder?oldid=119004"
Community content is available under CC-BY-SA unless otherwise noted.