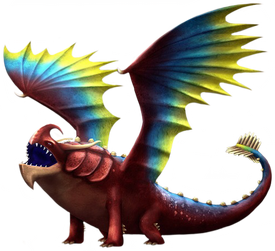 Grimtorn was used by Viggo during the siege on Berk. After the war, he was loyal to the Shellfire, with whom he now resides on Berk.

The Grimtorn is a Grim Rumblehorn dragon of the Tracker Class.

Grimtorn can only be acquired from
Shellfire Collections

If the Titan Training fails, the player will be compensated with 8.75M

If the Valka Titan Training fails, the player will be compensated with 140M

Retrieved from "https://riseofberk.fandom.com/wiki/Grimtorn?oldid=121873"
Community content is available under CC-BY-SA unless otherwise noted.