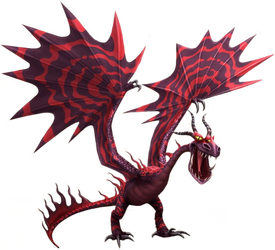 The Monstrous Nightmare attacks its foes with powerful streams of fire.

Hookfang's Nemesis is a Unique Monstrous Nightmare dragon of the Stoker Class.

During this event Hookfang's Nemesis could be purchased through Collections for 14,500

Retrieved from "https://riseofberk.fandom.com/wiki/Hookfang%27s_Nemesis?oldid=118922"
Community content is available under CC-BY-SA unless otherwise noted.