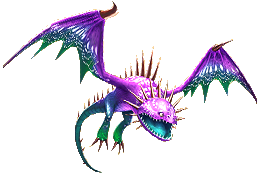 This Skrill uses the opportunity to strike at springtime by luring its prey closer with a fresh lavender scent before shocking its victims with a lightning blast!

Enemies Beware! The spiny Skrill attacks with balls of lightning more powerful than any natural storm.

The Lavender Skrill is a Exclusive Skrill dragon of the Strike Class.

The Lavender Skrill can be purchased from the shop for 9,000

A Lavender Skrill Egg can be found when searching the following locations:

If a Lavender Skrill Egg is in an extra saddlebag that the player chose not to purchase when searching with Toothless, the egg can be purchased for 7,500

During this event The Lavender Skrill could be purchased from the Book of Dragons for 8,800

A Lavender Skrill Egg could be found when searching the following Special Event Location:

If the Valka Titan Training fails, the player will be compensated with either 138

Retrieved from "https://riseofberk.fandom.com/wiki/Lavender_Skrill?oldid=129710"
Community content is available under CC-BY-SA unless otherwise noted.