Dragons: Rise of Berk Wiki
Register
Don't have an account?
Sign In
in: Dragons, Tidal Class, Exclusive Dragons,
and 2 more

Back to page
View source 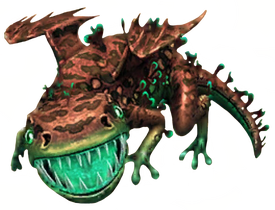 Found only in the deepest parts of the Barbaric Archipelago, the Mariner's Myth reminds us there is much more lurking in the depths than we could possibly imagine.

This dragon is bulky, brawny, and brutal. It can decimate opponents by drawing them near and attacking with one of its mighty limbs or its Viking-size teeth.
The Mariner's Myth is a Exclusive Submaripper dragon of the Tidal Class.

Mariner's Myth can only be acquired from
Special Events.

During this event Mariner's Myth could be purchased from the Book of Dragons for 12,000

A Mariner's Myth Egg could be found when searching the following Special Event Location:

If the Valka Titan Training fails, the player will be compensated 80M