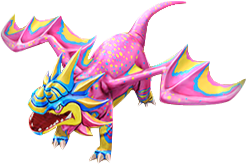 This Egg Biter was so eager to put its best fang forward that it bit itself inside its own egg.

These Dragons have a natural instinct to fight. They are biters right out of the egg!

Nipper is a Unique Egg Biter dragon of the Sharp Class.

During this event Nipper could be purchased through Collections for 8,850

If the Titan Training fails, the player will be compensated with either 45

If the Valka Titan Training fails, the player will be compensated with either 69

Retrieved from "https://riseofberk.fandom.com/wiki/Nipper?oldid=123757"
Community content is available under CC-BY-SA unless otherwise noted.