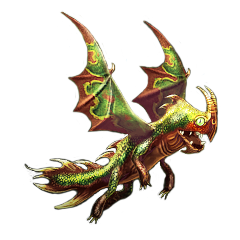 Night Terrors are used to keeping watch. So, this is the perfect dragon to rest alongside the Foreverwing, who is forever sleeping.

The Night Terror prefers to fight alongside other dragons. Keeping their opponents at a distance, keeps their size a mystery.

The Seedling Night Terror can only be acquired from
Foreverwing Collections.

Retrieved from "https://riseofberk.fandom.com/wiki/Seedling_Night_Terror?oldid=108993"
Community content is available under CC-BY-SA unless otherwise noted.