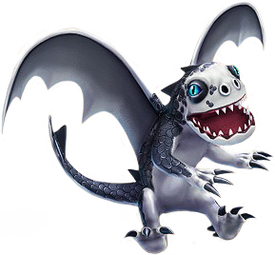 Rival and cousin to Sunchasers, Shadechasers appear after the long Berkian winters to chase off the shadows of lenghtly days, ushering in the Viking Spring.

The Shadechaser is a Exclusive Small Shadow dragon of the Stoker Class.

Shadechaser can only be acquired from
Special Events.

If the Titan Training fails, the player will be compensated with 7.4M

Retrieved from "https://riseofberk.fandom.com/wiki/Shadechaser?oldid=120805"
Community content is available under CC-BY-SA unless otherwise noted.