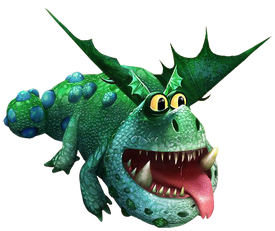 This small and happy Gronckle was definitely NOT what Dagur expected for his first Dragon. But, surprisingly, these two make an excellent team.

The Gronckle's tough hide can take more hits than almost any other Dragon...or any two Dragons combined!

Shattermaster is a Unique Gronckle dragon of the Boulder Class.

Shattermaster was available as part of a special event for a limited time from December 09, 2016 until December 12, 2016.

During this event Shattermaster could be purchased from the Book of Dragons for 8,000

A Shattermaster Egg could be found when searching the following Special Event Location:

Retrieved from "https://riseofberk.fandom.com/wiki/Shattermaster?oldid=123552"
Community content is available under CC-BY-SA unless otherwise noted.