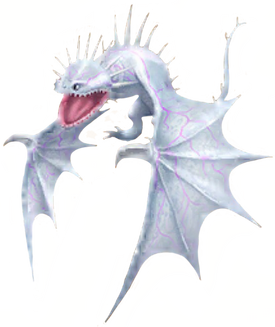 When Berk's Vikings fall helmet over heels in love, they often call it a "lightning bolt to the heart." But this snowy Skrill gives new meaning to that phrase!

Enemies Beware! The spiny Skrill attacks with balls of lightning more powerful than any natural storm.

The Sparkheart is a Exclusive Skrill dragon of the Strike Class.

Sparkheart can only be acquired from
Special Events.

Sparkheart was made available as the final reward for the Gauntlet, December 07 to 21, but the event was modified on December 9th due to issues with both the Snoggletog Feast and the Gauntlet.

If the Gauntlet was completed before December 09, a glitch in the reward animation could crash the game, but the real surprise was that when/if you did get the reward you could find a MAX level (150) Sparkheart in your Hangar!

As compensation for cancelling/modifying the two events, Ludia gave a Level 1 Sparkheart, and a level 1 Dreadel to all players, through the mail system. (the offer expired within 48 hours)

During this event Sparkheart could be purchased through Collections for 12,000

If the Titan Training fails, the player will be compensated with 7.75M

Retrieved from "https://riseofberk.fandom.com/wiki/Sparkheart?oldid=125288"
Community content is available under CC-BY-SA unless otherwise noted.