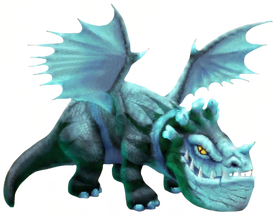 After eating too many rich Snoggletog meals, this gassy Gobsucker rings in the new year by blasting out its foul-smelling fireworks!

Let this Dragon fight from afar. Its acid blast may burn through enemies, but its back-gas-blast will destroy everyone else.

The Sparklestank is a Exclusive Gobsucker dragon of the Stoker Class.

The Sparklestank was available as part of a special event for a limited time from December 05, 2018 until December 09, 2018.

During this event The Sparklestank could be purchased from the Book of Dragons for 12,000

A Sparklestank Egg could be found when searching the following Special Event Location:

Retrieved from "https://riseofberk.fandom.com/wiki/Sparklestank?oldid=124227"
Community content is available under CC-BY-SA unless otherwise noted.