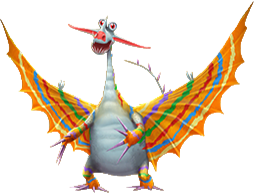 Remarkably trusting of humans, this trickster dragon loves to hide her eggs amongst Berk's decorations. But watch out - baby Changewings spit acid, too!

The Changewing distracts opponents at a distance while lobbing balls of acid in their general direction.

Springwing is a Unique Changewing dragon of the Mystery Class.

Springwing can only be acquired from
Special Events.

During this event The Springwing could be purchased from the Book of Dragons for 4,000

A Springwing Egg could be found when searching the following Special Event Location:

*These figures were known to be correct for previous versions, but have not yet been confirmed for the current version.

If the Titan Training fails, the player will be compensated with either 27

If the Valka Titan Training fails, the player will be compensated with either 41

Retrieved from "https://riseofberk.fandom.com/wiki/Springwing?oldid=120684"
Community content is available under CC-BY-SA unless otherwise noted.